The Fatsco Midget (I didn’t name it that!)

For the first winter and a half of my trailer life, I heated my sub-200 square foot space with a wonderful small wood stove from Fatsco. Forged in Michigan for over a 100 years, Fatsco’s line of stoves (Pet, Tiny Tot and the unfortunately named Midget, which is also ironically the largest of their stoves) are sturdy steel and iron affairs, can be had with a cook top, and have been tried and true for almost a century. Apparently they were originally designed to be used in milk delivery trucks so the product (and the driver’s blo0d) remained liquid, but since then Fatsco Stoves have been put to use on yachts and campers and tiny houses.

They work admirably. The cook stove models put out a lot of heat on top, and I found that adding two fans to the ceiling above mine to move the heat around the trailer cabin made all the difference in the world. If you need a tiny wood stove, check them out. Their website is rudimentary but they are nice folks and the wooden boat forum has some great threads on their stove line. If your space is around 100 square feet, their Tiny Tot and Pet would be great choices, though there are some reverse economy of scales with small wood stoves that I will cover below.

As my second full winter season got into gear, I began to think about an upgrade. I wanted a stove with modern double-burn baffles; I felt like I had been letting a lot of BTUs go up the chimney and I’m just cresting the age where splitting wood takes a toll on my body. For those of you who don’t geek out on wood stoves (and I’ve owned one for almost two decades), double-burn baffles provide a second supply of outside air to the upper part of the stove, in order to ignite the wood smoke. Wood smoke contains both methane and hydrogen, as well as little particles of carbonized wood (aka soot), and the added oxygen upstream burns the burnables, producing “cleaner” smoke and upping the efficiency of the stove. Most contemporary wood stoves have double-burn systems, and in some states and countries they are required.

I also wanted a window, though not just for the pretty view. Windows allow IR heat to pass through and warm things, which is nice, but more importantly they help the operator keep track of what’s going on in the stove, and here we come to one of the aforementioned reverse economies of scale: small wood stoves burn more quickly and require more frequent stoking. If you are not willing to get up every 30-60 minutes to add a piece of wood or two, a small wood stove is not a great lifestyle choice. Having a view of what’s going on inside the stove is extremely helpful, especially if you want to avoid having the restart it. And if you have a window, it’s best to have an airwash system in it so you can actually see through it. The airwash system diverts some of the outside air from the vent across the surface of the window so soot doesn’t form over it. Many stoves with secondary burn baffles also include airwash, although they work to varying degrees of effectiveness (the Morso stove in my old house needed frequent window cleaning in spite of their airwash system.)

My requirements laid out, I dove back into the online world of tiny wood stoves. The Morso Squirrel is one of the most well known commercial stoves, and I had a chance to look at one at Williamson Hardware. It’s cute, solid iron, had all the trappings one could want, but I eliminated it for three reasons. First it was too big for my space. If you’ve got 500 well-insulated feet, this is the stove for you. But for under 200, a small fire in a big stove is not ideal (for one, that double-burn system doesn’t work). Second, Morso stoves are firebrick-lined, which makes them heavy. And lastly, models sold in the US require a 6-inch flue (though I think the European ones might also come in 5″?). This is fine if you’re building from scratch, but I already had a nice 4″ Dickinson stainless steal flue system and wanted to stick to that guage.

While shopping for my first wood stove, I looked at Shipmate and Navigator Stoves, both US foundries producing traditional marine wood stoves for heating and cooking. They were the right size and had windows, but they didn’t have modern burn systems and are spendy. Cubic is a Canadian stove maker and they were just coming online when I was shopping around. Great price point and they seem to be well-regarded, but I wanted something a little bigger and more substantial with a larger mouth.

There is another reverse economy of scale at play here: the smaller the wood stove, the smaller you have to cut and split the wood you feed it, which means more work! The Fatsco Midget took wood up to 11″, the Cubic requires wood under 6″. It’s hard enough finding a wood supplier to cut their normal wood stock in half. Go as big as you can go in this regard. (The Fatsco Stoves tend to burn the wood vertically and so they can fit more burn space in the same footprint than a woodstove with a horizontal burn box.) 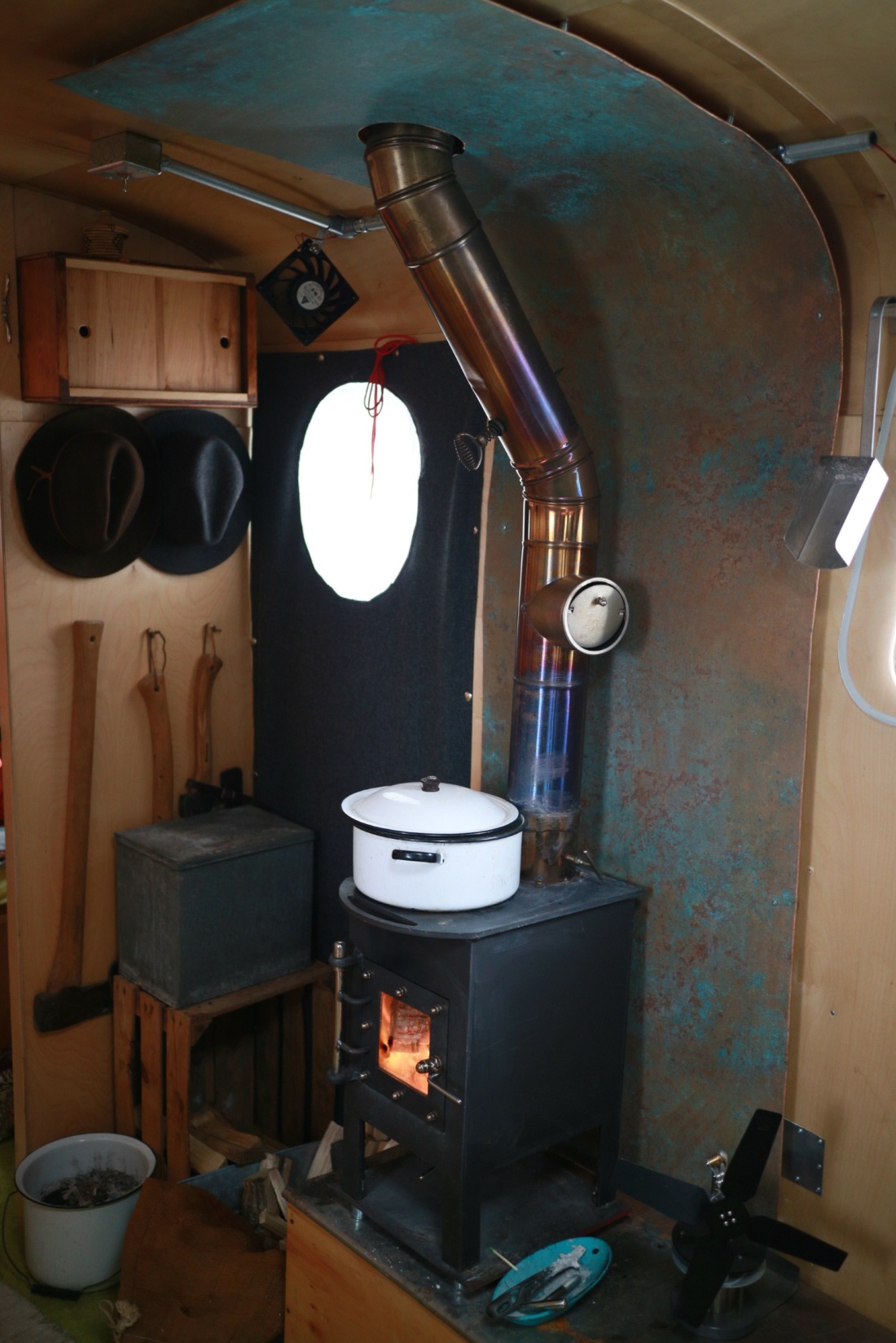 At some point in my search, I came across http://www.stovedesign.com and was intrigued. Owen Thomas is an artist and stovebuilder in Devon, England. The UK is a totally different stove market and there are a lot of smaller wood stove options. I suppose this is a result of smaller homes and smaller fireplaces in which to retrofit stoves, along with a tradition of caravans and canal boats and other tiny living spaces. Add in Ireland and you’ll soon be awash in small wood burners. Like the US market, however, quite a few stoves are Asian imports assembled in-country. Not necessarily bad, but part of my design ethos for the trailer was to support as many small businesses and makers as I could.

On the bespoke (that’s British for “handcrafted”) side of the aisle, Owen’s stoves stood out for incorporating not only a true double burn system, but also an airwash vent to keep the window clean and clear. When I saw that he made a slightly-larger version of his Queen Wasp stove called the Artic Wasp, I contacted him with some questions, and after a short conversation via email, I placed an order.

Owen is first and foremost an artist, known for large-scale “sound sculptures” like the Nautilus. He made his first stove, out of a salvaged gas cannister, for some circus friends. When they were delighted, he built a few more to bring to a festival to sell, and it paid his way. Over the years stoves have become more of his business, supporting him and his ongoing artistic journey. Owen’s stoves can be found in Europe, the USA, and one is even on the South Island of New Zealand. They are used in travel trailers (caravans), VW buses, Narrowboats, Yachts, Yurts and, he told me, “even some houses!” When I asked him about how his stoves fit into the market, he replied: “It’s a small niche for a bespoke, handmade, premium product. Functional art? Maybe a bit like a small production British sports car!” Owen has designed some fantastic stoves, like the stainless steel one that is suspended by a cable, or one that looks like a bathysphere. Steampunks would be delighted by the designs, moreso when they learned that he fits hot-water boilers to many of his stoves.

The Artic Wasp is one of Owen’s standard line of stoves that share a basic design but come in different sizes and heating capacities. These are fairly traditional in appearance, no atomic bomb curves like on some of his more fanciful models. But they look purpose-built and graceful, with really nice touches like the stainless steel door handle and hinges. The flue, located inside the stove-pipe, is also artfully done in stainless, though it’s sad it can’t be seen when installed! I actually think Owen is quite Scandavian in his stove designs, with form, function and beauty balanced nicely.

I’ve been burning the Artic Wasp for over a year. Every wood stove has a character and it takes time to get to know them, and this is doubly true for the small stoves. As I wrote above, you can’t just throw a log into this category of stove and walk away for six hours. I load the Wasp once or twice an hour during the day. At night, I pack it with wood (it takes splits up to be about 11″) and usually an Irish fire log (a compressed peat block that burns a long time, almost like coal) and close it down. It will burn through the night, though of course it doesn’t put out as much heat as it does when it’s open and gleefully burning. If I could get up I could pack it a second time, but I never do and the propane backup heater clicks on at some point in the night. But startup in the morning is easy; the Wasp so consistently has live coals in it that cleaning out the ashes is a bit of a challenge!

The Wasp is a stove within a stove: it has a shell of thick steel and a thinner inner firebox made of refractory steel. The primarly air intake is on the bottom, controlled via a long stainless handle. That air gets heated to about 500 degrees between the outer and inner boxes, and then enters the burn chamber through three vents at the back and down the front of the main baffle over the surface of the door, creating the airwash system. It burns very efficiently and there is almost never a need to clean the window, which is amazing. Morso touts their airwash system but I had to clean the window on my Squirrel stove several times a week (mostly because of closed down overnight burns), but Owen really nailed it with the Artic Wasp. Bravo.

A short time using the Wasp and I asked Owen to make me a longer handle for the door and he sent one. Before it got a little hot to the touch, but now it’s never a problem. Which brings up an important point: though far away, Owen provides a good service and stands by his stoves. I’m considering getting one of his boiler add-on units at some point and adding hot water to the trailer!

For a full-time burner, ash removal is the probably the biggest challenge. There is no provision for a pass-through grate or ash removal drawer and while this has the advantage of adding insulation thereby keeping the fire kindled for longer, it also builds up and can be a bit of a pain to remove. It can also spill over the lip and down the front of the stove, and sometimes I have to scrape it out of the door channel so it will close. It’s not a big deal and is certainly not exclusive to the Artic Wasp, but I offer it up because I know Owen is reading and will give it some thought!

Right now, as I finish up this review, the Artic Wasp is burning happily a few feet away from me. I have two computer fans rigged up above it on the ceiling, blowing either fore or aft depending on where I am in the trailer. It’s cozy, and I am pleased. If you are designing a small space, I heartily recommend Owen Thomas. You get a great product and you will likely pass on to the next generation, and you support small artisans that actually make stuff. That warms twice!

One thought on “Stovedesign.com: Bespoke Wood Stoves from Across the Pond”